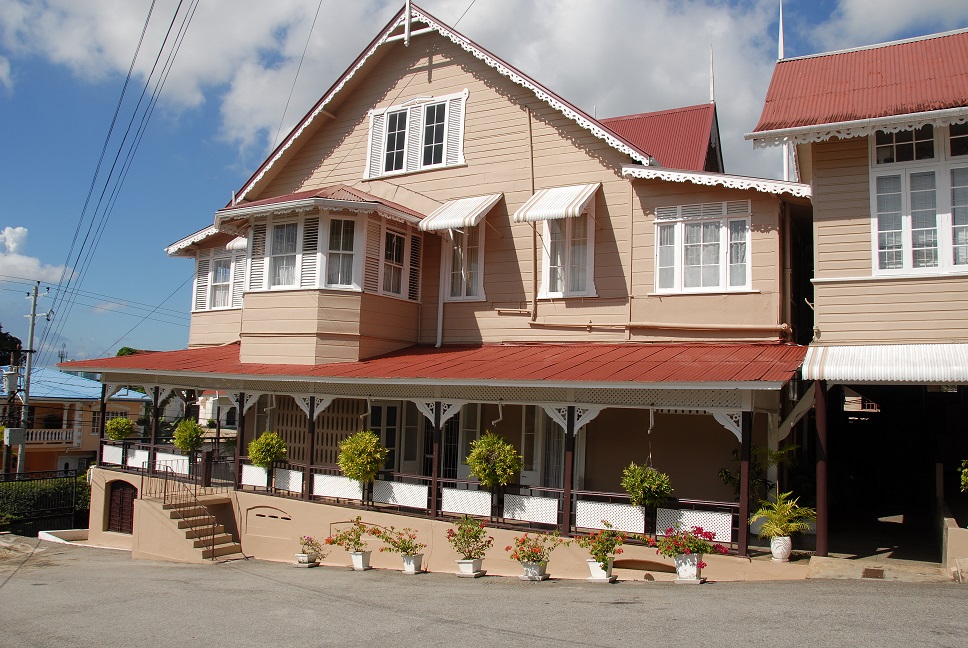 In 1860 a new elementary school was opened by the Sisters of St Joseph of Cluny on the site of St. George's College on the ground floor of Archbishop's House, later part of St. Joseph's Convent, Port of Spain.

Due to a lack of space, this school was transferred to the north-eastern corner of St. Joseph's Convent and then to "Providence Building" adjoining it in 1866. From this time onwards it was known as Providence Intermediate School. It was an excellent school and catered for students between the ages of 6 to 18 years, many of whom were prepared for Cambridge Examinations. There were 425 pupils on roll at this time.

In 1936, Providence won the Shield of Honour, given as a prize for the best written English Essay of the Intermediate Schools in the island.

With the expansion of St. Joseph's Convent, Port of Spain, Providence was forced to seek a new location which the nuns found in the George F. Huggins building in 1937. The school was a wooden building (where the Sisters now reside). It was the family dwelling so it was not built with a school in mind. Upstairs was one open room - classes were divided by partitions. There were as many as 68 students in one class with a monitor to assist. Sometimes for one student to move from her seat it was necessary to dislodge five other students. The only practical room was the Home Economics room which is now the Convent kitchen.

The Sisters teaching in Providence continued to reside in St. Joseph's Convent and went out to school daily on horse and buggy. Later they travelled by taxi. The principal had no desk. Teachers had no lunch room. If a teacher was ill, she did not go home, instead at lunch time, she would rest her head on her desk for a few moments.

Providence School, durilng this period enjoyed an excellent reputation- its students were disciplined, studious, and courteous. They were encouraged, exhorted, reprimanded, and defended for many years by outstanding principals such as Sr. Aloysius Mc Kenna,Sr. Elizabeth Smyth, Sr. Pius O'Callaghan - all of whom have returned to their Creator.

Government paid the teachers' salaries. That was all they contributed towards denominational education at our level. Infants paid 60 cents; students between 6 to 11 years paid $1.00 and 12 and over paid $1.80 per month. This paltry sum had to see to every expenditure. Consequently for repairs or extensions, students and teachers had to do a lot of fund raising. Generally, teachers taught nearly every subject to their class e.g. Sr. Regina Leiba taught O Level English Language, English Literature, Scripture, French and Spanish. One of her students, Helen Wilkie won the Silver Jerningham Medal for obtaining first place in the island at the Cambridge O'Level Examination. Even though conditions were rough, challenges a daily occurrence, demands very great, the teachers were extremely dedicated. As well as having only one free period a day, every teacher had an extra curricular activity - Guides, Choir, Legion, Drama. These were integral to the education received at Providence. (There was a school play every year). The students were eager to do well and so were receptive and generally co-operated. If they did not, they encountered the stern discipline of the Principal.

On the retirement of Sr. Pius O'Callaghan in 1961, Sr. Aloysius Ashby, herself a pupil of Providence succeeded her and in turn maintained the high standards of the school on the fair hills of Belmont. In 1961, secondary school fees were completely abolished. In 1963, there were 836 on roll. In 1965, Sr. Aloysius was called to assume Principalship of the Catholic Women's Training College and so Sr. Regina Leiba who at that time was already in Providence for seven years, was appointed Principal.

When the Draft Education Plan (1968-1983) was introduced, five Roman Catholic Intermediate schools had to choose whether to go fully into primary education or into the Junior Secondary System that was then being introduced. Providence opted for the latter. However, when the parents heardof this decision, they were most unhappy and expressed their objections at several meetings they had with the Ministry Officials. The Ministry at that time was also seriously considering the deployment of the staff in which the Teacher Is and the Assistant Teacher IIIs would be replaced by 17 graduate teachers. The principal resisted for she did not wish to lose proven and committed professional teachers. The Ministry yielded and a joint decision was arrived at. Because of this uncertainty of the status of the school, the Ministry sent only 10-13 Common Entrance students that year.

The school continued to attain outstanding success in many varied fields - academic, sporting, dramatic and singing - while ensuring a sound moral and religious education for girls who doday fill positions of importance and responsibility in Trinidadian society.

During this period improvements and extensions were made to diversify the curriculum and accommodate new subjects in accordance with the demands of modern education, so that pupils of Providence would have every opportunity for self-improvement, advancement and growth. New rooms like the air-conditioned library, audio-visual room and more recently the Administrative Block were later added.

Always progressive in outlook, Sr. Regina Leiba felt the wind of educational change and geared the education at Providence to accommodate it. She was instrumental in ushering in specialist teachers. She also saw the need for Business and Technical Vocational subjects and instituted the Business stream as well as the trinity of Home Economics.

With the growing emphasis on Science subjects, Chemistry and Additional Mathematics were introduced in 1988 and in 1990 with the assistance of the devoted past pupils, she installed and equipped a facility for teaching Computer Science - their gift to her on her 25th anniversary as Principal of Providence. The first group of students in Information Technology was entered for CXC in 1995. From humble beginnings, Providence has grown and developed into a flourishing Institute of Education which has now become a first choice for many girls in Common Entrance Examination.

The character and culture of the school have been shaped in no small measure by the school's philosophy - that education must be of the whole person for the whole of life. The teachers, guided by Sr. Regina strove to make the school a community of faith in which the Christian message and values, the experience of community worship and social concern are integrated into the total living of students, their parents and members of staff.

In January 1992, Sr. Regina Leiba retired after 34 years in the Teaching Service of Trinidad and Tobago, 26 of which were spent as Principal.

In February 1992, for the first time in the history of the school, the principalship passed on to a lay woman, Mrs. Patricia Ho Koon.

In January 1994, the principal and staff undertook an exercise in Strategic Planning to take Providence into the third millenium. As a result a new block was constructed above the Hall to accommodate the History and Geography Departments as well as two large Art Rooms. The already existing Prayer Room was expanded and the Tabernacle with the Blessed Sacrament was enthroned. The blessing of this block took place on May 12, 1995.

Mrs. Ho Koon retired in May 2008 and she was replaced by Mrs. Zena Ojoe Mark, a past pupil of Providence.

During her tenure, Mrs. Mark's visionary approach to technology improvement saw the outfitting of computer rooms with sufficient devices to cater for large classes, upgrading of Wi-Fi connections to facilitate access by teachers and students for integration and use of internet in lessons and activities and a projector drive was started to install multimedia projectors in each classroom.  Additionally, staff was exposed to in-house training over the last ten years and encouraged to pursue the MOE vacation workshops.  Many teachers began exploring applications such as Edmodo, Class Dojo and Showbie and used them to supplement students’ classroom experience.

Mrs. Mark also modified the school's curriculum to include IT classes from Form One upward and requested that HODs incorporate e-tests as one of the types of formative assessment done each term.

Mrs. Zena Ojoe Mark retired after 12 years of dedication to the school in August 2020 and she was replaced by Mrs. Krisal Gorin (Acting). Mrs. Gorin, supported by the teaching staff, continues to work at full speed to make Providence Girls an institution where education is experienced at its best.